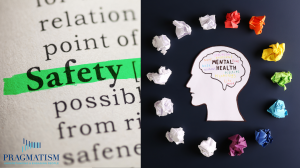 I wanted to share the most important tip that I could ever share, and that's about health and safety - let's not forget the HEALTH element when we talk health & safety - very poignant this week during national mental health awareness week.

Unfortunately in my career I've had to deal very closely with three fatalities, and it's something I never want to deal with again - it certainly isn't something I'd wish on anybody.

With one of these fatalities unfortunately I had to get very closely involved - so closely I helped the Police to recover the body. I had to talk to the grieving family on my own. I attended the funeral. It won't surprise you to hear that this was an incredibly stressful experience for me personally. I had counselling as a result and I will never forget the experience as long as I live - but that's where I'm lucky - I still live to tell the story.

So, why the link to mental health? Just because I had to have counselling? Not at all - it's not just about me, it's about the impact on others. One employee was stood talking to the other as the falling crane hook killed his friend in front of his eyes. It missed killing him too by a matter of inches. He suffered serious mental health implications as a result. What he saw, and the images he will see for the rest of his life, are far worse than those I see regularly.

The employee operating the crane incorrectly caused the accident - he not only lost his job, he also suffered serious mental health issues. I'm sure he will never recover from the knowledge of what his unsafe actions did to his friend and colleague - or to his family.

Why did I have to speak to the grieving family alone? Because the employee's manager had to stay in the car - he broke down and couldn't face going into the house. He, and other managers, will never lose the feeling of guilt.

Why would they feel guilty? Because as the investigations for corporate manslaughter unfolded, the root cause was clearly leadership - leaders had walked by the same unsafe act hundreds (if not thousands) of times. Putting a stop to this on just one of these occasions would have saved a life and the tragic loss for a family.

Talking of the family, what about their mental health? The employee's sister was pregnant and she asked me why I had killed her unborn baby's uncle. She lost her beloved brother. Her parents (who couldn't even look at me) had lost their cherished son. His girlfirend had lost her future husband. Their future would never be born. How could any member of the family recover from this? They never will - time is a great healer but some wounds never heal, they just become something debilitating that people learn to live with.

Surely nobody else's mental health was impacted? What about the hundreds of colleagues who attended the funeral and stood outside because the venue was full? It was a very macho environment - hundreds of grown men crying and hugging to comfort each other suggests that they were severely impacted - not one of them will ever forget.

So, this is more a plea rather than a tip - if you see unsafe practices act on them and never walk by - it really could be the last time you ever see that person and, more importantly, they may never see their family and loved ones again.