The root cause of all workplace issues is leadership 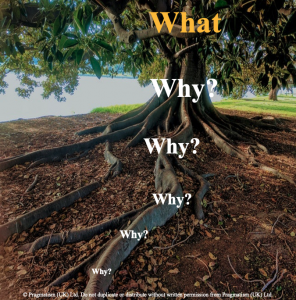 This is not an attack on leadership - quite the opposite in fact. Yes, if you’re wondering, I've done my fair share of leadership roles, so I do have some qualifications from that most important of educational establishments, the University of Life. My years spent as a Factory Manager running a couple of high-volume food manufacturing plants and leading up to 850 people didn't disprove my theory, it just strengthened it.

People can be a pain to manage, but they should be a pleasure to lead. We all know that a manager is so very different to a leader, there are thousands of theories that tell us so, but what about the practical reality? My experience is there’s a significant gap in many organisations - and whilst we often blame the managers for not being leaders, in my view it isn't always their fault - the organisation must take a level of responsibility.

You ask any Trade Union representative what training development they’ve had, and they’ll probably reel off lots of courses they’ve attended, who mentors and coaches them and where they go to as a support network for help. Ask many managers the same question and the answer will often be quite the opposite – little or no training, and a perception that they lack support in doing the difficult role they’re trying to fulfil.

Don't get me wrong, leadership it isn't about the number of training courses you've been on. However, sometimes organisations fall into the trap of think that a contract of employment will have a miraculous affect - once somebody has signed a contract that has manager in the title, surely they should transform into a brilliant leader, shouldn't they? Why should it matter that we've appointed a strong technical person to lead people when it just isn't in their DNA? They've been promoted so they should be a good leader - they just need to get on with it and lead that team of 45 people otherwise we'll 'performance manage' them.

Then the grievances roll in and we dive into the laborious waste of energy that is a formal grievance. The manager is accused of all sorts, and he / she goes on the defensive. Sometimes they even submit their own counter-grievance. By this stage pretty much everything is lost. Then they call me as "the mediator" as there's a big problem, and the grievance didn't resolve the issue. I have news for anybody wondering why a grievance hasn't resolved the issue - firstly, the real issue has probably not even been discussed and, secondly, grievances don't tend to resolve issues - they usually just drive people further apart.

One good challenge to my view was from a good lawyer friend of mine. She didn't agree that leadership is the root cause of all workplace issues as sometimes there are just toxic employees. I agree with this fully - some people are just toxic (although very rare), but a good leader will either change the person or change the person. We must give our leaders the capability of having difficult conversations.

This is one of the reasons we train internal mediators – not only to mediate disputes when they happen, but to prevent them in the first place. When you give the actual leaders these skills it’s a real game-changer, as they will not only want to avoid any formal grievances or complaints, but they will have the skills and confidence to do so. For me this is where you get real cultural change! Click here to see what one line manager had to say about training as a mediator.

Once you have these skills in place through your leadership and HR teams, you can really start to think about transforming cultures through an “issue resolution” philosophy rather than a grievance process. I’ve been there through such a transition, and it really does make the world of difference – see more details here.

If you’re wanting to change culture for the better, eliminate formal grievances and drive proper employee engagement then deal with the root cause issue – give your leaders the tools and the confidence to help employees resolve issues and prevent them in the first place!